This method not only provides safe, clean drinking water but also helps protect pipes and appliances.

Therefore, it is recommended to soften the water first, extending the membrane’s useful life.

What is the Difference Between Reverse Osmosis and Water Softeners?

Water softeners are used to remove high concentrations of minerals that cause hard water. These minerals are primarily calcium and magnesium, which easily bind with other contaminants to form the crusty film often found on shower heads and toilet bowls.

See this article to learn more about water softener shower heads and if they work.

Most water softeners work by using negatively charged materials like resin beads to attract positively charged calcium and magnesium molecules. This allows the minerals to be collected within the resin, which are then cleaned using salty water.

Reverse osmosis employs a special filtering process to remove contaminants not collected by water filters nor water softeners. This is done by sending the water at high pressure through a special membrane designed to filter out even the smallest particles. This removes essentially all of the minerals, chemicals and contaminants from the water.

Why Use a Water Softener Before Reverse Osmosis?

Ideally, most household water supplies should be filtered, softened, and treated. In the United States, many regions have hard ground water. This is indicated by the lime and other mineral deposits present.

These minerals have been dissolved and are generally invisible to the naked eye, however, in high concentrations they can be found in the form of scaling around plumbing fixtures.

This why whole house water filtration and softening products are so popular. A water softener essentially removes calcium and magnesium very well, but may leave other contaminants such as chlorine and other chemicals behind. This is one reason to use a water softener before a reverse osmosis system, as opposed to the other way around. The same applies to water filters, such as those that pass tap water through a sieve of charcoal.

The Whole house reverses osmosis systems then take the conditioned water and remove any remaining sodium, chlorine, or other unwanted chemicals left behind by the water softener. This process provides water comparable to bottled water, but for the entire home. This process is great for fixtures and pipes but might have unwanted side effects.

Is Reverse Osmosis Treated Water Good for Me?

Reverse osmosis treatments help remove the two main culprits of hard water: magnesium and calcium, along with other contaminants that may be harmful in high concentrations. Reverse osmosis takes water filtration to the next level by collecting bacteria and minerals not affected by a water softener. They also collect bacteria and chemicals often left behind by standard water filters. 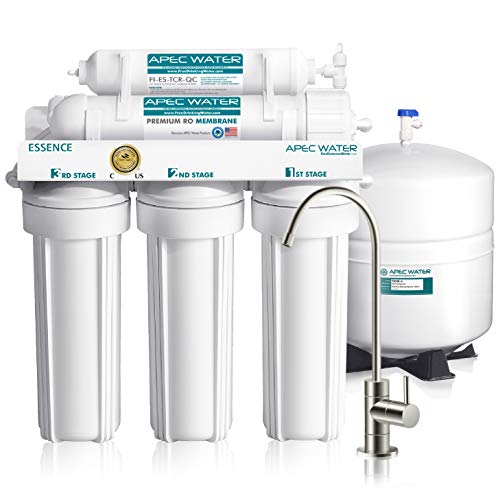 However, using reverse osmosis to provide drinking water can have negative side effects. Some research has suggested that consuming water that has been treated using a reverse osmosis system can be unhealthy over time. This is generally attributed to the removal of not only bad minerals and contaminants, but the good ones as well.

This is especially evident with people who get most of their minerals from water, as opposed to foods. Older people, for example, tend to need more of these minerals, particularly calcium. Reverse osmosis treatment does a very good job of removing these minerals, along with most everything else. So much so, that some elderly people must add the minerals back into their diets if they usually get most of those minerals from water.

What are the Downsides of Using a Water Softener?

Opinions on this matter vary, but the most common concern among users is that water softening traditionally uses sodium to reduce the natural minerals in the water.  As mentioned earlier, this process may remove the unwanted minerals, but for those people with elevated sodium levels, water softening is typically not recommended. In fact, water softeners have actually been banned from certain municipalities, and even entire states.

This is primarily because approximately four gallons of freshwater are required to soften one gallon. This becomes particularly troublesome in areas where water softeners are prevalent, because of the high sodium concentrations in the wastewater. This wastewater either ends up in a septic tank and therefore, in the groundwater, or the public sewer.

As water treatment facilities cannot always remove all the excess sodium, this excess sodium gets redistributed and used again. Over time, this can lead to very high sodium concentrations in wells and soil used for agriculture. As such, the aforementioned municipalities have banned the use of sodium- based water softening systems. As a result, many consumers have replaced water softening systems with water conditioning.

What is Water Conditioning?

Water conditioners prevent the formation of seed crystals, which are required for the scaly buildup often found around shower heads and other plumbing fixtures. Water conditioners therefore do not add, nor remove minerals from the water directly as a water softener would. Instead, these systems simply do not allow the crystallized minerals from binding together, eliminating the risk of scaling.

Which System is Best for Me?

The answer will typically rely on where you live and how hard the water is. For those concerned about the negative effects a water softener may have, a non-sodium- based system will often be the solution. As mentioned earlier, treating water via filtering, softening, and reverse osmosis treatment will eliminate most concerns.

However, due to the inherent issues, consumers should do their homework and take their personal situation into effect before purchasing any water treatment system.

How Do I Know My Water Softener is Working?

Are you noticing your water is lathering or your skin is dry or itchy? This could be

Menards Water Softener Review: Which One Should You Buy?

Are you thinking of buying a Menards water softener? They are one of the more popular water