In this article, we’ll go into more detail about how to choose your expansion tank and why you need one. Whether you live in the city or out in the country, expansion tanks can save you the money and trouble of replacing or repairing your water heater. 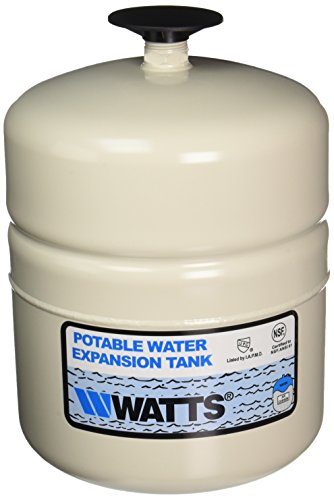 What Sizes are Expansion Tanks Available in?

As a general rule, 50 gallons of water will expand to 52 gallons when it heats up. This is why a 2-gallon expansion tank is usually enough to handle a 50-gallon water heater. When in doubt, however, it’s always better to go up an expansion tank size rather than down a size. Having too big of a tank isn’t an issue, but having too small of one can be a problem.

How Much Does It Cost to Install an Expansion Tank?

The tank itself will only cost $40 to $200 depending on the size of the tank and the brand. A 4.5-gallon tank will cost more than a 2-gallon tank and brands like A.O. Smith and Amtrol are better brands that will cost more. Like most things in life, you get what you pay for with thermal expansion tanks.

Cheaper tanks will cost less to install, but they could cost you big bucks down the road. Shoddy expansion tanks are more likely to leak and fail than expensive expansion tanks. A bad expansion tank will result in having to replace it much sooner than normal or it could even lead to water heater failure.

When Do I Need an Expansion Tank?

Depending on what city or county you live in, expansion tanks are required for all water heaters. This isn’t always the case, however, and expansion tanks are optional in some locations. Outside of code requirements, the main instance that an expansion tank is recommended is whenever you have a closed-loop water system.

A closed-loop water system is one that has any kind of check valve or water pressure regulating valve installed on its plumbing system. These types of valves are necessary, however, whenever the water pressure going to your house is between 40 and 80 psi. An expansion tank will do nothing to slow the pressure of the water flow, but it’s necessary to combat the thermal buildup that results from having pressure valves.

Because of the nature of a closed-loop system, the buildup of thermal pressure has nowhere to go without an expansion tank. If you’ve ever seen a water heater that failed because of thermal expansion, it looks like there was an explosion on the inside of it, causing the sides to balloon out. Thermal expansion tanks give the pressure somewhere to go and keep this from happening.

Want to know the difference between an expansion and pressure tank? Check out this article to learn more.

Can I Have More than One Expansion Tank?

What is the life expectancy of an expansion tank?

It’s impossible to say exactly how long your expansion tank will last. Some give out as early as two years after installation, while others can last up to a decade. The quality of your expansion tank and how it was installed are two factors that impact its lifespan. Other things like water quality also have an impact on durability.

What are common issues with expansion tanks?

The most common issue with expansion tanks is their tendency to leak. If they aren’t installed properly or if the wrong size is installed, then leaks are inevitable and will occur much sooner than they should. Expansion tanks need to be installed vertically and be properly supported due to the fact that as they fill with water they’ll get much heavier.

Does an expansion tank affect your water pressure?

Can I install an expansion tank myself?

If you have the tools and skills necessary to perform plumbing tasks, then you can install an expansion tank yourself. Each expansion tank will come with instructions and directions telling you how to install it.

Is it OK to oversize a thermal expansion tank?

It’s most definitely OK to oversize a thermal expansion tank, just make sure you don’t undersized it. A tank that is too big will simply cost slightly more to purchase, but no harm will result from it. If you’re uncertain about what size your tank should be, it’s always better to go too big as opposed to too small.

Should the expansion tank be installed on the hot or cold side of my water system?

While there are some instances where it’s OK to install an expansion tank on the hot water side, they should always be installed on the cold side if possible.

How do I size a water heater expansion tank?

Here is a step-by-step process of how to size a water heater expansion tank.

What Type Of Heater Do You Need For Hydronic Floor Heating?